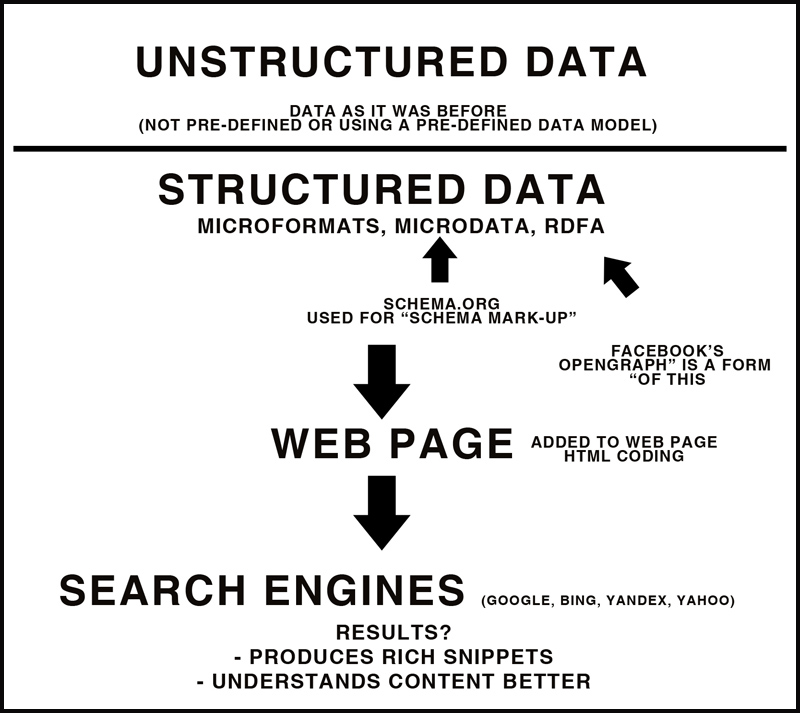 With SEO rapidly changing and the scope of the Internet taking on new forms, a new base of terms has emerged in the interest of re-defining how data is interpreted in search engines. The subject of “structured data” is not entirely new, though it has found new life within the last few years as search engines are evolving and eliminating the garbage factors that have plagued search since the beginning.

For SEO’s practitioners who keep their learning curve up to date, we have seen quite a few new terms thrown at us, some of which I found to be initially confusing at times depending on “which article” you were reading and “which set of terms” were used in the article. I set out to simplify these terms by reviewing and summarizing them from over 50 articles. I hope this article provides a clearer understanding of how they all relate. This article is not intended to instruct on “each particular item” but rather provide a simple foundation of how they fit together.

Structured data: a general name for all markups that abides by a predetermined set of rules (pre-defined)
Structured data markup (rich data markup) = 1 or more of the following, Microformats, Microdata (schema.org markup referred to as “schema markup”), and RDFa (Open Graph (Facebook’s microdata) is 1 form of this).  Twittercards is also a form of structured data which is intended for Twitter. “Google Authorship” is another form of rich data which is more specific to Google+ and an author-to-article-site relationship.

RECOMMENDATIONS:
– Recommended to stick with just 1 form of “rich data” rather than using multiples
– Google recommends “microdata” over the other 2  (schema.org markup is a form of microdata)
– Structured data is not needed on “every” page of your site, just the important ones.
– Google recommends not abusing NON VISIBLE ITEMS, most items should be visible
(I’ve found that while it’s useful to have longitude, latitude, as part of your markup, usually it’s not data that you need to display on your web page making for a good case to hide this bit of schema markup)

Note: So far people successfully use Schema.org and social graph protocols together on one page. Really it’s a judgment call. I think the main idea here is there is no need to have EVERY type of structured data on 1 page. Pick 1 that you like and leave it at that.

DOES STRUCTURED DATA HELP YOUR SEO?
This has been a bit of a misdirection-factor-kind-of-statement. Google says it doesn’t, but then says that “rich snippets” do (which are products of structured data)…ha ha go figure!

Google also states that the better it understands your page the better chance it might have at ranking (which is what structured data is intended for)…..go figure!

SO WHAT ARE THEY REALLY SAYING THEN?
They are being cautious that SEO’s don’t all jump on the wagon and start using this protocol to gain ranking leverage….though that’s exactly what we will do.

Schema.org: collection of microdata markup vocabulary (NOT a markup language or a protocol) (defines ITEM TYPES such as “movies”, “products”, “businesses”, “reviews”, “local business”…etc)
go to schema.org for actual code markups (which is quite detailed and extensive)

Structured data is used by search engines to generate rich snippets.
If Google understands the content on your pages properly, they can create “rich snippets” (detailed information intended to help users with specific queries)

“Google (and other search engines) are constantly changing the way they interpret and display structured markup data as rich snippets.”

Google currently only supports these “rich snippets” for content types: (though that could grow)

WHAT ARE THE 3 OPTIONS FOR STRUCTURED DATA?

1- Using Rich Data Markup (1 of the rich data markup codes mentioned above)
2- Using “Data Highlighter” in your “Webmaster Tools” Account
3- Use both, but option #1 inclusions will override #2

MAIN DIFFERENCES BETWEEN THE 2?
“Rich Data Markup” is coding. You will have to code and add to web pages (to your html)
Works for all major search engines

“Data highlighter” you do without coding thru WMT. It might be faster, easier, but with less control
Only works within Google

SCHEMA.ORG defines what vocabulary to use in your STRUCTURED DATA MARKUP (using MICRODATA) which is code placed on your web page. The results are RICH SNIPPETS in search engines. If Rich snippets are not produced, it still helps the search engines to better understand what your page and/or site is about.

The following graphic better illustrates the relationship between all mentioned: